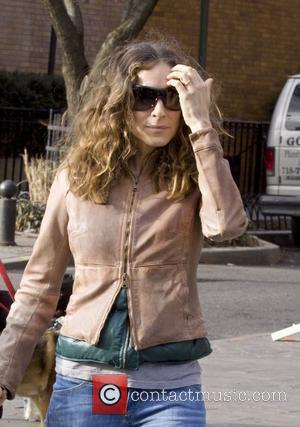 Sarah Jessica Parker has a task on her hands when coming up with a plausible storyline for the second Sex And The City movie - because the film will have to address the global economic crisis.
The second big screen adaptation of the hit show was confirmed by writer/director Michael Patrick King earlier this month (Feb09), after months of speculation the four leading ladies - Sarah Jessica Parker, Kim Cattrall, Cynthia Nixon and Kristin Davis - had signed on to make another movie.
The first film, released last summer (08), proved a huge hit with cinemagoers - taking in $400 million (£274 million) worldwide.
But Parker admits she is concerned about how the movie's writers will tackle the second film's screenplay - because the world is in a different place than it was last year (08).
She tells Access Hollywood, "How do we address these economic times in a franchise that has a lot to do with luxury and labels? How do we do that well? And how do we do that in a not lazy way?
"There is a lot that we have to think about because times are very different. So these are nice challenges, these are good challenges."
But the actress has promised the film will thrill fans.
She adds, "I think we want this one to be a romp. The last one, we got to tell a really mature sophisticated story that had real heartbreak in it, and this time, I think we want a romp. We want our audience to have a massive romp."