Sarah Jessica Parker Was Once Sent A Treadmill By One Of Her Honeymoon In Vegas Movie Producers In A Bid To Get Her Into Better Shape. 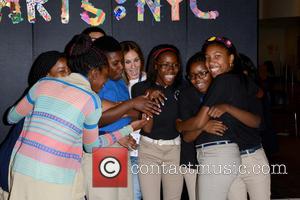 The Sex and the City star was in her late 20s when she starred in the 1992 comedy, in which she famously wore a tiny black bikini.

While appearing on actor John Benjamin Hickey's new Sirius XM Radio show on Wednesday (23Sep15), Parker said her favourite song is C+C Music Factory's 1990 hit Everybody Dance Now, because it always reminds her of a pivotal time in her life.

She recalled, "I was about do Honeymoon In Vegas and before that I was off to do another movie in Iowa and the producer of Honeymoon in Vegas was very concerned about me being fit for Honeymoon in Vegas. So, they sent a treadmill to Iowa.

"I would run to this the summer proceeding me leaving to go to Iowa and then ultimately go to Vegas and New York to shoot Honeymoon In Vegas.

She added, "I would very diligently go out every single day and run like a lunatic to this song. And then when I went to Iowa, on the treadmill, I would continue to run to the song. And then we went to Vegas and I had a treadmill also in my room and I would get up every morning and run."