Sarah Hyland thinks you have to be smart about love in Los Angeles and insists she won't get engaged at a young age. 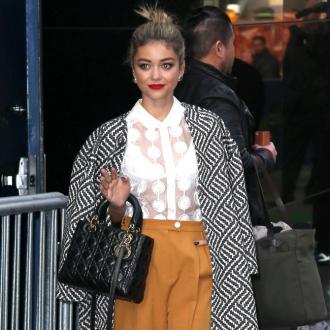 Sarah Hyland thinks ''you have to be smart'' about love in Los Angeles.

The 24-year-old actress, who recently started dating her 'Vampire Academy' co-star Dominic Sherwood, insists she will never get engaged at a young age.

The 'Modern Family' star said: ''I know some people in Hollywood get engaged young, but I won't be one of them. I love my work. And my friends. And I do love LOVE, but you have to be smart about it. Especially in L.A.''

Asked about the craziest rumour she has heard about herself, the 'Modern Family star said: ''When I was 20, there was an article saying that I was engaged and [my co-star] Julie Bowen did not approve. The whole thing was a fabrication out of left field. I thought it was ridiculous.''

Despite being photographed kissing Dominic recently, Sarah, who obtained a permanent restraining order against ex-boyfriend Matthew Prokop in October after claiming he abused her for four years before she ended their relationship in August, insists she is focusing on her career at the moment.

Discussing her plans for the future, she told Galore magazine: ''I can't imagine my life without my 'Modern Family'. Maybe more TV? I definitely want to do more films. Whichever seems right for me at the time.''