Sarah Harding has got a motivational Tattoo with the words, 'Don't be bitter - glitter' across her back. 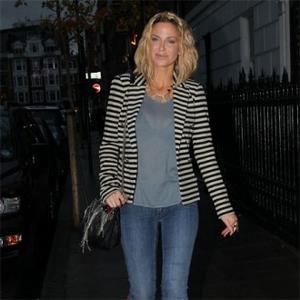 Sarah Harding has got an inspirational new Tattoo.

The Girls Aloud singer - who endured a rough start to 2012 after being injured during a holiday bust-up with her ex- boyfriend Theo De Vries and admitting a four-year addiction to powerful sleeping pills - showed off her new inking yesterday (12.01.11).

Leaving a West London spa, Sarah's motivational tattoo 'Don't be bitter - glitter' in swirling script was visible across the top of her back.

Sarah - who left an American rehabilitation facility in October after being treated for alcoholism and depression - recently explained it took three weeks of intensive treatment to help her break her dependence on prescription drug Zopiclone, which she started taking in 2006 to help her with sleep problems.

She said: "I'm just glad I survived. My drinking was out of control and I was addicted to sleeping pills. It was an awful combination."

Opening up about her fight with Theo on a getaway to Innsbruck, Austria, which left her with a bandaged arm and bruises, she said: "I have a black eye and bruising. He had me by the neck, on the floor, and I kicked him to get him off me.

"He grabbed me by my hair - throwing my head on the floor. While he had me by The Hair, he was pulling me across the floor. He was dragging me around.

"He was smacking my head on the floor. He bit my ear. And when I kicked him to try and get him off me, I got his nose and he was bleeding. He smeared the blood all over my face so it was all over my clothes.

"I've got bruises on my bum. Bruises on my legs. The damage to my arm is probably the worst. This is where they bandaged me in hospital as they thought I might have fractured it."

Sarah - who ended her romance with DJ Tom Crane in November - met Theo in rehab in Cape Town, South Africa.