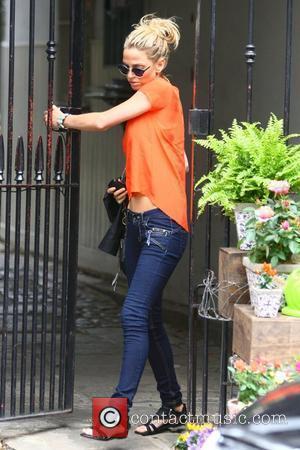 Picture: Sarah Harding out and about in Primrose Hill London, England - 10.07.12

British pop star Sarah Harding helped save the life of a drunken reveller on the Spanish party island of Ibiza last week (begs02Jul12) after finding him slumped in a road.
The Girls Aloud star, who quit drinking following a stint in rehab last year (11), put the unnamed man in the recovery position after he collapsed in the path of oncoming traffic.
An onlooker tells Britain's Daily Mirror newspaper, "Sarah was driving around the island in a hire car when she saw this young guy passed out on his back with vomit around him. She slammed on her brakes and rushed over to him to see if he was OK. Luckily, he was still breathing, but she was worried he might choke if he was sick so she put him on his side in the recovery position and then flagged a passing car down for assistance.
"A local then called an ambulance for him and the guy was taken to hospital. The medics said he would have to have his stomach pumped, and thanked Sarah for stepping in. If he had been sick while he was lying on his back he could have choked to death. Sarah said she felt sorry for the guy and couldn't drive on without making sure he was OK."