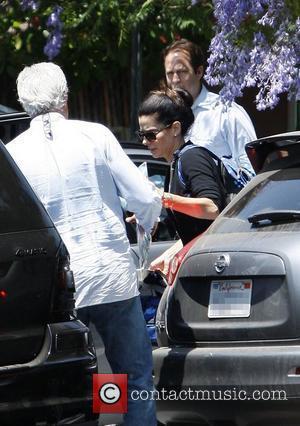 Sandra Bullock and Chelsea Handler, fighting in a shower. Yes, this sounds like a 14-year-old boys late night unconscious, however this is something that actually happened. In a surprise opening for Chelsea Handler's talk show on Monday night (15th Oct 2012), in which Jennifer Aniston was the star guest, Sandra Bullock was seen naked, entering the shower with an already naked Chelsea Handler to verbally (and a little bit physically) abuse her. All in good humour though.

This video comes after last week's horrendous and hilarious rap video from Gwyneth Paltrow and Cameron Diaz in which they mock her sexual preferences and accuse her of promiscuity. The jovial abuse continued with Bullock's skit.

The Blind Side star continued with the jibes though, quoted in the Hollywood Reporter, "Stop sleeping with your guests! Stop it! "It's beneath you. That is why I have not done your show. I do not want to sleep with you." Of course, the evidence was stacked up against Bullock on that one, having stepped naked into a shower with Handler. Bullock slapped Handler a few times before walking out.

We hope this is the second in a tradition of hilarious and boundary pushing skits from Handler and her celeb. friends. Jennifer Aniston who also appeared on the show on Monday got a bit weepywhile discussing her engagement with Justin Theroux who she is expected to marry within the next few months. You can catch Chelsea with her star studded guests on 'Chelsea Lately' on E! weekly.