Sandra Bullock's Son Is A 'Flirt'

Sandra Bullock says her baby son, Louis, is a ''flirt'' and definitely has an ''eye for the ladies''. 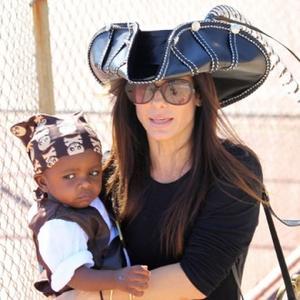 Sandra Bullock says her baby son is a "flirt".

The Oscar-winning actress - who adopted little Louis in January 2012 when he was a newborn - admits the tot has already developed an eye for the ladies, which can sometimes cause her embarrassment.

She said: "He's a little flirt! He definitely appreciates the fairer sex.

"He doesn't flirt with me like that, and someone told me that's probably a good thing. He's got a look where he just cuts the eyes at the ladies, and I'm like, 'I'm so sorry! I don't know what's happening.'"

Sandra also admits she's very biased when it comes to Louis - who she started to adopt with ex-husband Jesse James and carried on the process after discovering he had cheated on her - and can't wait to spend the festive season with him.

During an appearance on 'The Late Show with Jay Leno', the 'Extremely Loud and Incredibly Close' star said: "He is probably the best baby in the world, but I think every parent says that."

"I don't think he understands the concept of Christmas yet, but he does understand that everything at his height level is really bright with lots of lights. He doesn't get it yet but I think next year he'll get it and demand things."