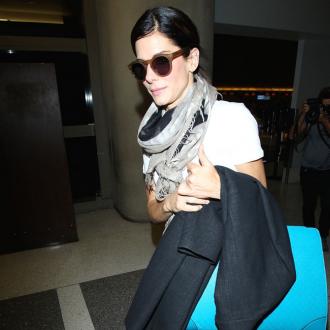 The 51-year-old actress, who has yet to comment on reports she adopted a baby girl recently, has been ''happily dating'' photographer Bryan Randall, 49, since June, and despite introducing him to her little boy, they are trying to take their relationship slowly.

A source close to the 'Gravity' star told PEOPLE magazine: ''They started dating after Bryan photographed Louis for his graduation.

''[Bryan] respects that her main priority is Louis; he's a parent himself. There is no co-parenting involved.''

The Oscar winner was spotted walking arm-in-arm with Bryan, who has an older daughter from a previous relationship, in L.A. last week, but the insider insists they haven't moved in together just yet.

The couple also recently enjoyed a double date with newlyweds Jennifer Aniston, 46, and Justin Theroux, 44, at her restaurant Bess Bistro in Austin, Texas.

An eyewitness said: ''It was a nice intimate setting and the couples were cozy. They seemed to know each other very well, and seemed quite close.''

Former model Bryan is the first person Sandra has seriously dated following her divorce from Jesse James in 2010.