Sandra Bullock Gets The Laughs With Her 'Chinese' Award Presentation 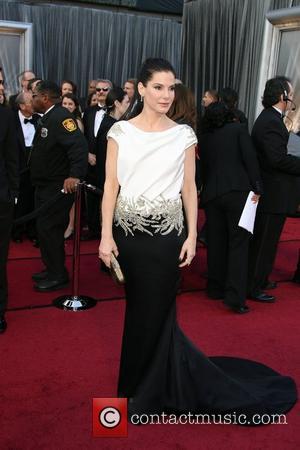 Sandra Bullock added a comic twist to the presentation of the Best Foreign Language Film Oscar at last night's Academy Awards. When she took to the mic to present the award, she told the audience "The Academy is trying something new this year ... Because there are over 1.2bn people in China, they have asked me to briefly speak about this category in Mandarin Chinese. Luckily, I speak it fluently." Before launching into the speech, she added "One quick note, as my mother spoke German to us as we were growing up, my Chinese has a very slight German accent."

Bullock then launched into her short speech, which was written entirely in the German language. She was telling the truth about her mother though. Helga D. Meyer, who passed away in 2000 was a German opera singer and voice teacher. Her parents married in Germany before moving together to Arlington, Virginia, where Sandra Bullock was born. Bullock presented the award to Asghar Farhadi for the Iranian film A Separation, about a married couple forced to choose between leaving Iran to build a better life for their child, or staying, to look after a parent suffering with Alzheimers.

Accepting the award, Farhadi - the film's director - said "At this time many Iranians all over the world are watching us and I imagine them to be very happy. They are happy not just because of an important award or a film or a filmmaker, but because at the time when talk of war, intimidation, and aggression is exchanged between politicians the name of their country, Iran, is spoken here through her glorious culture, a rich and ancient culture that has been hidden under the heavy dust of politics."