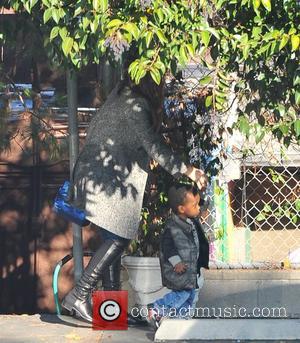 Picture: Sandra Bullock and her son Louis out and about Los Angeles, California - 19.01.12

Sandra Bullock is keeping busy by looking after her two-year-old adopted son. Sandra Bullock may be taking time off from the big screen but she was spotted this week picking up her little boy from pre-school.

Wearing jeans, trainers and a long-sleeved t-shirt, Bullock's son Louis looked eager to play whilst his mother was seen carrying his bag, coat and a carton of Rice Dream, a lactose-free milk alternative. Bullock adopted Louis from New Orleans in January 2010 where only two months after she split from ex-husband Jesse James. It wasn't until April that Bullock had revealed that they had decided for divorce months earlier and that she had decided to raise Louis as a single mother. Within a few weeks, Bullock had won her Best Actress Oscar and it had emerged that the motorcyclist had cheated on her during their five-year marriage.

In other news, Bullock has denied that she and star Ryan Reynolds are together. According to Star magazine, a source stated: 'Sandra's still so hung up on Ryan, I think she'd drop everything at a moment's notice to be his wife if her dream somehow came true and he popped the question.' The source even said that Bullock was very jealous and flirty with him at his 35th birthday party, which was also attended by his girlfriend, Blake Lively. Sandra's representative has said that the report should be dismissed as it is 'entirely fabricated'.