Sandra Bullock leads an all female cast who will attempt to pull off the heist of the century.

Next summer eight women will attempt to pull off the heist of the century at the annual Met Ball in New York City.

In Summer 2018…the tide will turn. Here’s your First Look at #Oceans8. https://t.co/fn9uvpswCx pic.twitter.com/v4FBffaG3X

Tweeting out the image, the studio wrote: “In Summer 2018…the tide will turn. Here’s your First Look at #Oceans8.”

The film will feature an appearance by Ocean’s Eleven star Matt Damon, who will reprise his role as Linus Caldwell. But it’s not yet known if we can expect to see George Clooney's Danny Ocean or Brad Pitt's Rusty Ryan.

James Corden will also star as an insurance broker who begins to grow suspicious of the group, while the villian will be played by Damien Lewis. Richard Armitage has also been cast in an as-yet-unknown role.

Filming began in October and so far the female cast have been spotted shooting scenes all over New York, including at fast food chain Papaya King, where Rihanna and Bullock were pictured enjoying hot dogs.

Earlier this month it was also revealed that Kim Kardashian and Kendall Jenner will have a cameo appearance in the film, after they were spotting filming scenes recreating the Met Ball in New York.

Ocean’s Eight is scheduled for release on June 8 2018. 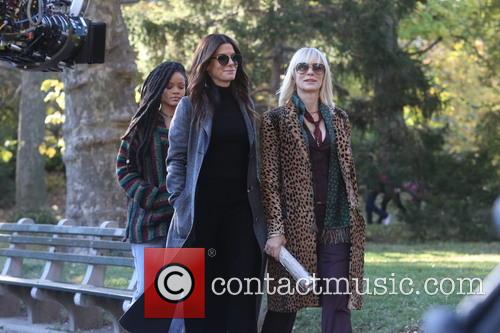