The actress admits there were similarities between her and Scarlett Overkill.

Sandra Bullock doesn't often get to play the villain in a movie, so she was thrilled to land the role as the dastardly Scarlett Overkill in Minions, the animated spin-off prequel  to Despicable Me.

"She's more like me than anything else I've been in," Bullock laughs. "She's evil, she's crabby and a little bit bitchy - all the traits that I think make for a good villainness. It's so good to be bad. And I got paid for it!" 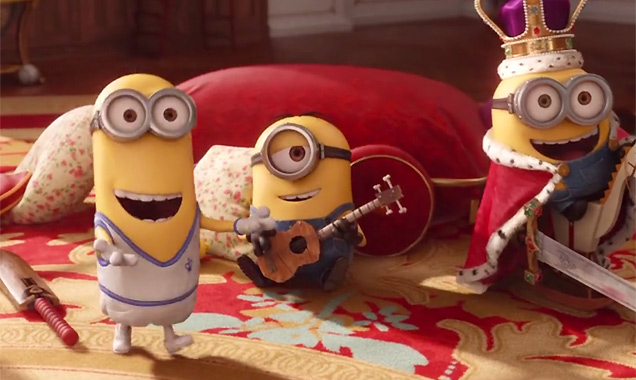 The minions have their own movie!

That said, she admits that voicing characters for animated isn't always easy. "I was doing an amalgamation of three different people," she says. "It's hard because you're by yourself in that little box!"

To make the character, she would record the lines, then the animators would create the imagery to go with it. "The animation is just so good," she says. "The animators are taking every nuance, every weird thing that you did with your voice and turning it into a great motion. The artisans on this are extraordinary. Unbelievable!"

Another reason to take on this role was to make a movie her 5-year-old son Louis could watch. "Even though he doesn't know what I do and he doesn't know it's me, I can sit in the theatre and watch him," Bullock says. "Nothing makes me happier than hearing that boy laugh, so hopefully I'll be able to do that."

More: Read our review of 'Despicable Me 2'

Although she admits that Louis actually knows her villainous side fairly well already. "That's crabby mommy in the morning! That's crabby mommy when she doesn't fit into her jeans! No, I'm just kidding," she laughs. "Or maybe not!"

Minions opens June 26th in the UK and on July 10th in the US.