Review of Smile... It Confuses People Album by Sandi Thom 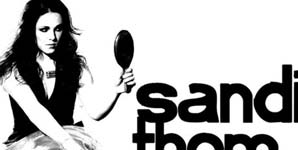 While it is hard to believe that there really were ever 100,000 people tuning into a webcast from Tooting (and, at the time, Sandi Thom was already a signed artist, so it is hard to see this as 'genuinely self-made musician territory'), none of that would be relevant if the album is great, right?

Unfortunately, the album is as average as James Blunt's, or KT Tunstall's (which, clearly, isn't the same thing as saying it won't sell...) - solid, acoustic, adult pop. The single, I Wish I Was A Punk Rocker, is weak, her voice is pretty ordinary, and the songs on the rest of the album are so-so, dull, repetitive and awkward.

Unfortunately, peddling the mediocre to a Katie Melua audience via a PR stunt is about as clever as this album gets.