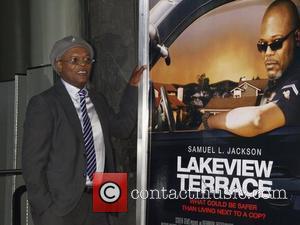 Neil LaBute's Lakeview Terrace, in which a black cop played by Samuel L. Jackson, terrorizes an interracial couple (Patrick Wilson and Kerry Washington) who become his neighbors, is already sparking controversy -- among the critics. In his Chicago Sun-Times review, Roger Ebert predicts "Some will find it exciting. Some will find it an opportunity for an examination of conscience. Some will leave feeling vaguely uneasy. Some won't like it and will be absolutely sure why they don't, but their reasons will not agree. Some will hate elements that others can't even see. Some will only see a thriller. I find movies like this alive and provoking, and I'm exhilarated to have my thinking challenged at every step of the way." On the other hand, Claudia Puig writes in USA Today "While the story might spur discussion on an important subject, the film ends up following a formulaic route. As social commentary, it doesn't go deeply enough, and as a psychological thriller, it peters out in silliness." Likewise critics are divided over the performance of the movie's star, Jackson. In the Austin American Statesman critic Chris Garcia praises it, saying that Jackson's "roiling, rhythmic voice is an instrument of interrogation and intimidation. It barks, recoils, then rears up and roars. He has a rapper's control of tone and timbre, turning passion and ire into a kind of sociopathic backbeat." But A.O. Scott concludes in the New York Times "Mr. Jackson's glowering, bellowing performance is so close to self-parody that I had to check the end credits to make sure I hadn't been watching Dave Chappelle doing an extended version of his Comedy Central impersonation."