Sam Smith has 'fallen in love with music all over again'

Sam Smith has ''fallen in love with music all over again'' following successful surgery on his vocal cords. 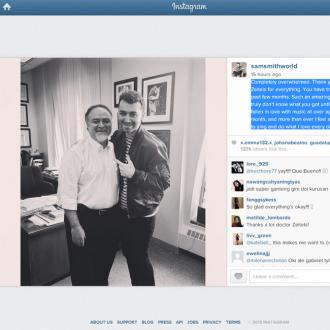 Sam Smith has ''fallen in love with music all over again''.

The 'Stay With Me' singer underwent surgery on his vocal cords last month but claims the lengthy period during which he was unable to sing has given him a new appreciation for his musical talent.

Praising his surgeon, Dr. Steven Zeitels, the director of the Massachusetts General Hospital Voice Center, in an Instagram post, he wrote: ''Completely overwhelmed. Thank you so much Doctor Zeitels for everything. You have truly saved me this past few months. Such an amazing man. You truly truly truly don't know what you got until you lose it. I have fallen in love with music all over again over this past month, and more than ever I feel so blessed to be able to sing and do what I love every day xx (sic)''

His positive comments came as he was given permission to speak again, which was a huge relief for the excited star, who wrote in a separate post, ''I CAN SPEAK AGAIN!!!!!!!! (sic)''

The 23-year-old musician was forced to cancel the remainder of his Australian tour in April as a result of his haemorrhaged vocal cords, but now he is on the path to recovery, he informed his fans Down Under he plans to return to perform a string of shows later this year.

He wrote on Twitter: ''AUSTRALIA. From all the bad news has come some good news!! I'm coming back to make up for the cancelled shows & I get to play bloody arenas ... So excited to sing for all of you and apologise personally for my bleeding throat xxxx (sic)''