Sam Smith and John Legend have collaborated on a new version of the 22-year-old singer's track 'Lay Me Down' for Comic Relief, with Sam praising the star as ''unbelievable'' to work with. 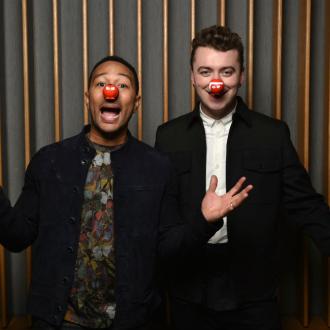 The 22-year-old singer has re-recorded his hit single 'Lay Me Down' with the musician - which is being released to raise money for British charity Comic Relief - and will perform the track with the 'All Of Me' hitmaker at the London Palladium on Friday (13.03.15) for the Red Nose Day telethon.

Speaking about working with the musician, he told BBC Radio 1's Nick Grimshaw: ''He's unbelievable, he's such a pro. We've been in contact for almost a year by email but I'd never met him and finally I got to meet him and he was so cool. I've never seen someone so professional in the studio like that, it was amazing.''

The special track is now available from iTunes and Sainsbury's supermarkets, with the initiative being inspired by a recent trip the star took to an LGBT community project in London which is supported by the charity.

He explained: ''I recently visited a Comic Relief-funded project in my hometown which supports the young LGBT community in London. I'm extremely proud that my single will help raise money for projects like this and many others in the UK and across Africa.''

The pair recorded the track in Los Angeles earlier this year, with the 36-year-old singer-songwriter saying he had been excited about heading into the studio with the star.

He added: ''Sam is such a talented artist. We've been looking forward to working together for a while now. I'm so glad we could collaborate on such a great song and for such a great cause.''

The solo version of the track will be released as Sam's next single on March 15.