Screenwriter Dustin Lance Black gave Sam Smith a very public reminder that he’s not the first openly gay person to win an Oscar, after the singer made the faux pas during his acceptance speech at Sunday night’s ceremony. Black, who won an Oscar for best original screenplay in 2009 for Milk, tweeted Smith after his speech, also telling the singer to stop texting his fiancé, British diver Tom Daley. 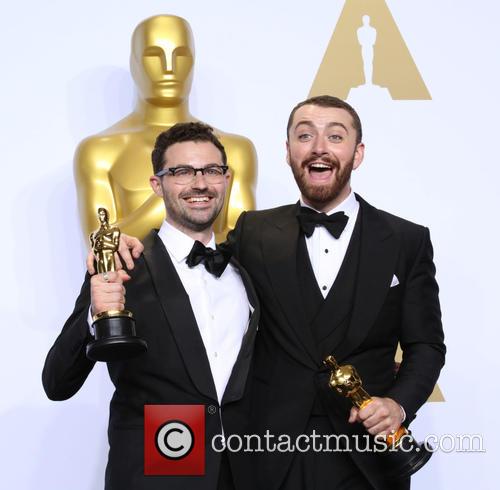 Sam Smith and ‘Writings On The Wall’ co-writer Jimmy Napes.

“Hey @SamSmithWorld, if you have no idea who I am, it may be time to stop texting my fiancé,” Black tweeted, while also including a link to a video of his 2009 win.

During his acceptance speech, Smith mentioned comments made by Ian McKellen in a Guardian interview last month, where the actor said that no openly gay man had ever won the Oscar.

More: Sam Smith Clarifies Position After Being Mocked On Twitter For Reaction To Racist Abuse

“I read an article a few months ago by Sir Ian McKellen and he said that no openly gay man had ever won an Oscar,” Smith said. “And if this is the case, even if it isn’t the case, I want to dedicate this to the LGBT community all around the world. I stand here tonight as a proud gay man and I hope we can all stand together as equals one day.”

Hey @SamSmithWorld, if you have no idea who I am, it may be time to stop texting my fiancé. Here's a start: https://t.co/8hGTRtIaMK

However McKellen’s comments were in regard to the Best Actor category, not the awards as a whole. McKellen had said: “No openly gay man has ever won the Oscar; I wonder if that is prejudice or chance,” when asked about the current diversity debate in Hollywood. McKellen was nominated for the best actor prize in 1998 for Gods and Monsters.

Entertainment Weekly reports that Smith was informed of his faux pas backstage at the awards and responded: “Shit! Fuck that! Two’s my lucky number, so it’s all good. Who was the other person?”

Alongside Black, other openly gay Oscar winners include, Elton John in 1995 for ‘Can You Feel the Love Tonight’ from The Lion King (in the same category as Smith). Alan Ball for best original screenplay in 2000 for American Beauty and Midnight Cowboy director John Schlesinger in 1970.