The Hunger Games Pin-up Sam Claflin And His Wife Laura Haddock Turned Heads At The London Premiere Of Mockingjay - Part 2 On Thursday Night (05nov15) With The Help Of What Looked Like A Baby Bump. 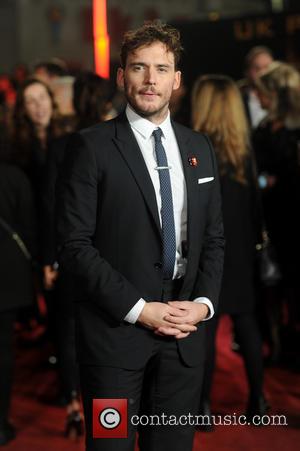 The actor, who plays Finnick Odair in The Hunger Games films, wasn't about to break baby news before the screening, but he cradled his wife's stomach for the cameras - a move which has become a silent confirmation for stars in recent years.

The beaming mum-to-be, wearing a white gown with jewellery print, also cupped her baby belly as she posed for pictures.

A premiere participant tells WENN, "They left no doubt that Laura was pregnant without actually saying anything. They both looked really happy as they posed for the cameras."

Claflin, who was joined on the red carpet by his The Hunger Games co-stars Jennifer Lawrence, Josh Hutcherson, Liam Hemsworth and Natalie Dormer, among others, was excited to be part of the final franchise premiere and tweeted fans and followers as he was heading to the launch.

He wrote: "I just want to say a HUGE thank you to all you guys waiting outside in the very English weather! Not long now. I'm as excited as you are!"

Claflin also joined his castmates on the red carpet in Berlin, Germany on Wednesday night (04Nov15).

He wed Guardians of the Galaxy actress Haddock in secret in 2013.