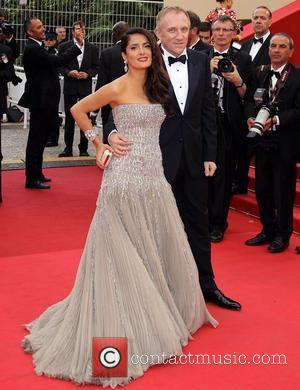 Salma Hayek's husband, the French businessman Francois-Henri Pinault, fathered a child with the supermodel Linda Evangelista, according to the New York Post. Hayek's husband is reportedly the father of Evangelista's 4-year-old son Augustin James.
Despite denying Pinault's paternity when confronted with the story back in October 2007, the Victoria Secret model arrived in court yesterday in the hope of arranging a support agreement with the billionaire businessman, who acts as Ceo for the conglomerate that owns Gucci and Yves St. Laurent. Pinault and Hayek welcomed their own daughter, Valentina, in September 2007. The couple then married on Valentine's Day 2009 in Paris. The businessman also fathers two other children from a previous marriage. Ever since giving birth to Augustin in October 2006, Evangelista has refused to name the boy's biological father. The couple reportedly conceived the child in early 2006, when Pinault had briefly separated from Hayek.
Salma Hayek was previously in a relationship with the actor Edward Norton between 1999 and 2003 - she also dated Josh Lucas for a short period. The actress confirmed her engagement to Francois in March 2007, giving birth to their first child at the Cedars-Sinai Medical Centre in Los Angeles on 21st September 2007.