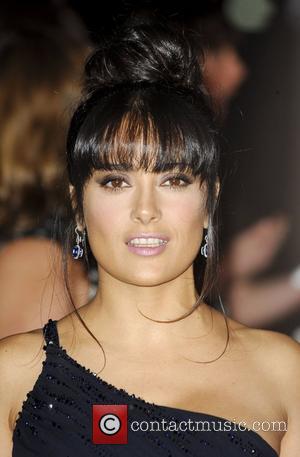 Actress Salma Hayek wanted to hire a body double to avoid kissing Kevin James in Here Comes The Boom, because she is such good friends with the actor and his family.

The Grown Ups co-stars reteamed for the new sports comedy, but Hayek admits she had reservations about puckering up with James due to their real-life friendship.

Hayek reveals their children are very close, and she didn't want to risk upsetting the youngsters with the scene.

She tells Britain's Ok! magazine, "I actually did (want a body double) because I'm really good friends with his wife and children. I've been kissing people on the screen all the time, but we're actually good friends and the kids are good friends. It's the kid thing. By the way, it is really weird because he's actually a very good kisser. It was not a real kiss. It was through a fence. Nobody opened their mouth. But he does have good lips."