Salma Hayek's Cousin Was Attacked By The Actress' Fans When She Added Her Photo To Her Social Media Account - Because They Insisted She Was An Imposter. 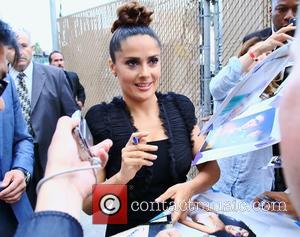 The Desperado star's younger relative, who shares her name, was upset because no one believed she was really Salma Hayek.

The star explains, "In my town (in Mexico), (there were) three Salma Hayeks, at least that I know of. It was my aunt, the original Salma Hayek, then I came... and then my father's brother decided to name my cousin also Salma (sic).

"Then my name became kind of known and then I hear rumours my aunt... she got married and her name was spelled (differently), but sometimes for special reservations or something she'd tell them (restaurant bosses) the name 'Salma Hayek' and they would (be like), 'Of course we have (room). Please come'. And then she'd show up and they'd say, 'You're Salma Hayek...?' She was in her 60s."

The famous Salma tells U.S. chat show host Jimmy Kimmel, "My poor cousin had her social media (account) for a long time and she put her picture (up) and everybody started calling her, 'You're fake, you're not really Salma Hayek...' and she was like, 'I am Salma Hayek!'"