Salma Hayek says her 'Here Comes The Boom' co-star Kevin James is a good kisser but admits it was weird locking lips with him because he's a good friend of hers. 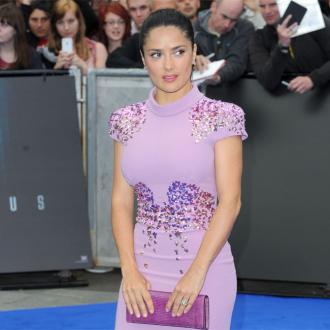 The stunning actress has to lock lips with the actor in new movie 'Here Comes The Boom' and she admits it was a ''weird'' experience because he's her friend and she was very impressed with his technique.

The mother-of-one said: ''I did want a double for the kissing scene because I'm really good friends with his wife and children. I've been kissing people on the screen all the time, but we're actually really good friends and the kids are good friends. It's the kid thing. By the way, it was really weird because he's actually a very good kisser! It was not a real kiss. It was through a fence. Nobody opened their mouth. But he does have good lips.''

As well as being a good kisser, the Mexican beauty was also impressed with how quickly the American actor picked up Spanish - her native tongue - on the set of the movie.

The Mexican beauty told Britain's OK! magazine: ''He's good, he's a fast learner. Supermercado, chilli con carne, quesadillas. But you know, when we were doing the movie, he was eating no carne - only lettuce and green stuff. It was horrible.''