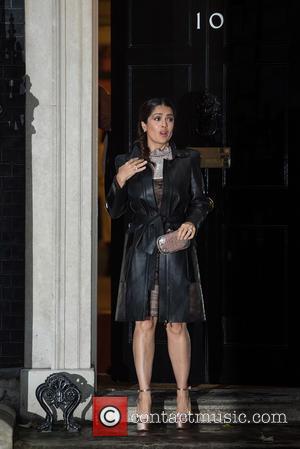 Clinton announced the formation of the initiative when she joined Marc Anthony at his concert in Florida on Friday (03Oct15) and the Grown Ups star explains she signed on after hearing the controversial comments Donald Trump made about Mexican immigrants in his presidential bid launch in June (15).

"We cannot let hate and discrimination determine the outcome of this election," Hayek wrote in a campaign email for Clinton. "We owe it to the hard-working Latinos that came before us, to ourselves and to our children, to show the people who unfairly label us as criminals and speak down to us that our community is strong, meaningful and incredibly powerful."

"We are one of the largest, youngest, and fastest-growing groups in the United States of America," she added. "We deserve a candidate who respects the contributions we have made to this country and understands how important it is that our community continues to thrive, all while treating us (with dignity and respect)."

Anthony has also joined the campaign and is urging supporters to join together to vote in a message on Twitter.com.

He writes, "This election is important for the future of the Latino community, our vote could make the difference @HillaryClinton."

Trump upset Latinos when he declared many of the Mexican immigrants in America are "rapists" who bring crime and drugs into the country.