Actress Salma Hayek Sang The Praises Of Her "Inspiration" Malala Yousafzai After Meeting The Nobel Peace Prize Winner For The First Time. 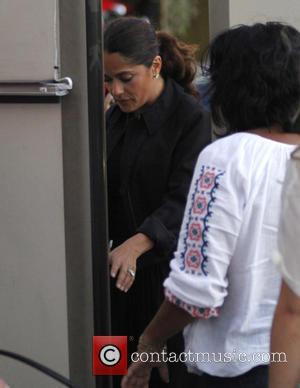 Picture: Salma Hayek - Salma Hayek arrives at The Staples Center via the back door to see Taylor Swift in concert with her children at The...

The Frida star was left in awe when she had the opportunity to speak with the 18-year-old activist at a recent event, and the Mexican beauty took to Instagram.com to share photos of the meeting.

Hayek posted pictures of herself alongside Yousafzai and her parents, adding the caption, "With Malala Yousafzai, who is a light to the world and one of my inspirations and her extraordinary father Ziauddin Yousafzai, who is one of my heroes. If you don’t know who they are, you should look up these amazing activists for women education who are changing the world."

Yousafzai gained international attention when she was shot in the head by a Taliban gunman in 2012 for her outspoken beliefs on education. She survived and has since become a leading international women's rights icon.