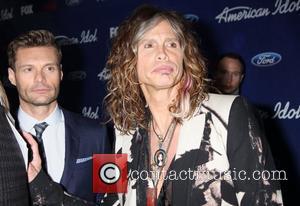 Ryan Seacrest might not be in the good books of his girlfriend Julianne Hough today, after he embarrassed her on Wednesday's episode of American Idol. The host almost didn't make the show, with Tmz.com reporting just before show-time that he was feeling sick with "a bad stomach bug".
Producers called Cat Deely to stand in, but a queasy looking Seacreast eventually managed to make the show. With his girlfriend Julianne Hough at the taping, the presenter mentioned to the audience that she had seen contestant Phillip Phillips backstage, saying, "I think she sighed and blushed and said, 'Yummy'. We'll be having this conversation after the show, darling". A shy looking Hough managed to find the funny side, though after his song, Phillips told Seacrest, "I'm not trying to steal your girl, Ryan". It marks a surprising change of tact for the presenter, who has attempted to keep his relationship with Hough strictly private during their time together. Though she has appeared in numerous high profile movies, Julianne was nevertheless the talk of the web during the show, with her name trending on micro blogging site Twitter.
Despite his illness, Seacrest can probably take solace in the fact that his new $30 million contract with American Idol is signed, sealed and delivered, according to the Hollywood Reporter.