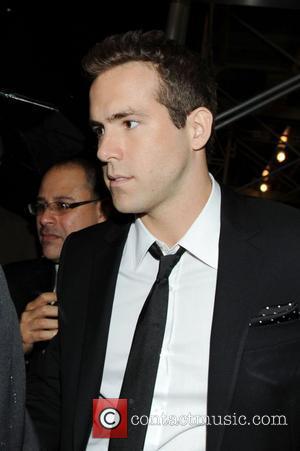 Picture: Ryan Reynolds 'A Funny Thing Happened On The Way To Cure Parkinson's' 2008 Benefit For The Michael J. Fox Foundation at the Sheraton New York...

Actor and American football fanatic Ryan Reynolds has been invited to watch his favourite NFL team the Green Bay Packers play from the luxury of a hospitality suite - thanks to TV presenter Rachael Ray and the Packers' star quarter back AARON RODGERS.
During an appearance on Ray's U.S. talk show on Wednesday (12Nov08) Reynolds was also presented with matching team shirts bearing his and his wife Scarlett Johansson's names and the numbers 09 and 27, representing their wedding date, 27 September (08).
The gifts were in recognition of the star's achievement in running the New York Marathon this month (Nov08), which he completed in aid of Michael J. Fox's Parkinson's Disease foundation. Fox was also a guest on the show.