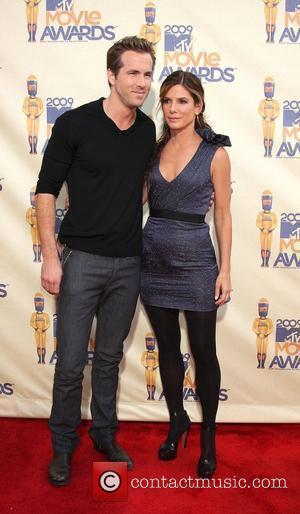 Ryan Reynolds is still buzzing about an unexpected wedding gift from SAMUEL L. JACKSON - a beehive full of the stinging insects.
The actor married Hollywood siren Scarlett Johansson in a remote location just outside of his native Vancouver, Canada last September (08), and asked celebrity guests to forgo showering them with wedding gifts.
So the X-Men Origins: Wolverine star was shocked when a box of bees was left in his backyard.
He says, "Someone came to my door and said, 'I have a gift for you in my trunk from Samuel L. Jackson.' He comes back from the trunk and it's humming an insane degree. And he tells me, 'Mr. Jackson would like you to have this beehive.' So he hands me a couple of beekeeping outfits and a lifetime subscription to the Beekeepers Journal. And the next thing I know, I'm making honey."
But Reynolds has warmed up to his new pets, since realising Jackson has provided an excellent way to scare away unwanted visitors.
He adds, "It's actually a great security system. Some people are afraid of security systems, some people afraid of guard dogs, but I don't know anyone who's not afraid of swarms of bees."