For his latest action-comedy, Shane Black (Kiss Kiss Bang Bang, Iron Man 3) assembled an unlikely comedy duo in Russell Crowe and Ryan Gosling, then encouraged them to play it in the style of classic pairings like Abbott and Costello or Hope and Crosby.

While Gosling has some comedy experience (Crazy Stupid Love, The Big Short), Crowe isn't known for his levity. But he saw more than humour in the project. "I just really liked the density of this script," Crowe says. "I wouldn't have described it necessarily as a comedy because it's full of social commentary and other things that you don't necessarily find in just a comedy." 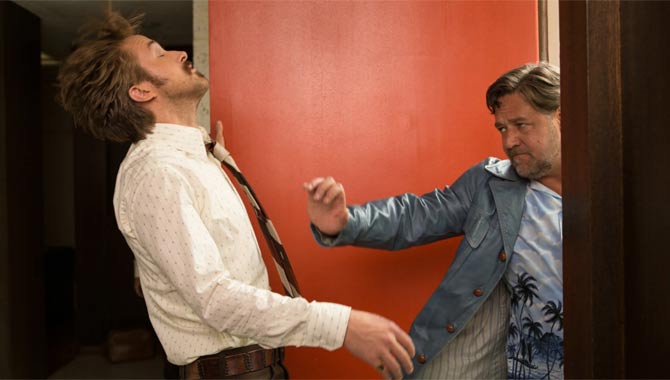 He laughs when asked about beefing up for the role. "What I decided to do was just to live a completely sedentary life," he says. "What am I going to do, compete with Ryan? So I just decided to go the other way."

And Gosling loved working with him. "I think Shane cast us not because he thought we were funny, but because he thought it would be funny to have two guys that are so serious be in something so silly," Gosling says. "Even if Russell and I didn't have the rapport that we have, I think it still would have worked on that level. It's a bonus that we had fun together!"

Crowe's casting was one thing that drew Gosling to the role. "When I read the script, I read it with Russell in mind," he says. "I could completely picture him in the role even though I'd never seen him do anything like that. And the movie just immediately became so funny."

And there was an absurdity to the script that fuelled the tone. "Every scene we're in," Gosling says, "we know we're in a movie where's there's a conversation with a giant, cigarette-smoking bumble bee, who is busting our balls! And it's set in the '70s, which just seemed dirty. I grew up in the '80s, so the '70s wasn't a draw. But it was fun to do."

Crowe says he'd be happy reteam with Gosling for a sequel, even though that wasn't in their mind while filming. "Any movie I've ever been on where people get so excited that they start planning the sequel, it's never come off. So we'll see," Crowe says. "The thing is, all I'm concerned about is that people get a kick out of it."

Watch the trailer for The Nice Guys: