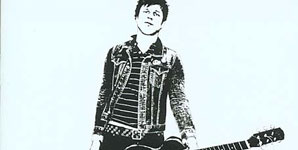 At the tender young age of 31 Ryan Adams has a massive collection of songs and albums behind him. He is one of the most prolific writers of the current age and in a recent interview he said that I can toss off songs in my sleep. Often compared to Dylan and Neil Young, an accolade well deserved, with his heart felt and touching lyrics.

Being a huge Adams fan I could not wait to see the man solo, having seen him with his band a few times and been blown away at every occasion.

There is no need for a support act with Ryan. He often arrives late on stage and plays until the venue manager kick him off the stage.

Predictably 30mins late, Ryan appears on the stage at Bridgewater Hall to a standing ovation. On stage there are two acoustic guitars, snare drum, piano, harmonica and a few glasses of wine. With a red book under his arm which contains his list of 50-60 songs which he chooses as the set goes on he ambled up to the piano.

The hall resonated with excitement of which Ryan would play tonight, the drunken one, the bored one or the truly breathtaking – but never ever dull.

The opening bars of 'Don't get sentimental on me' are amazingly sung, Ryan's voice sores up into the Gods. After each song Ryan goes back to his scrap book searching for his next gem. This at times slowed the performance down and halted the flow of his playing.

Highlights of the first half of the set are 'Call Me on Your Way Back Home, Why Do They Leave? and Nightbirds.' But all the tracks were performed well and left the crowd baying for more in the second half. Before the break he picked up an Electric guitar to comedy shouts of ' Judas !', Ryan laughed at the Dylan Jibe retorting ' it's my name on the ticket'.

After a short cigarette break and a top up of wine, of which Ryan had 4-5 glasses in the first half performance, he appeared back on stage.

When the stars go blue, was a fine example of what Ryan can do when he is firing on all cylinders highlighting the amazing talent and full potential of his ability.

The crowd joked with Ryan about the depressing songs; he took all the jibes in good sprits playing along with them. The audience laughed when he announced the next track 'Everything Dies' Ryan said in all seriousness 'but that's the title!'

Having seen Ryan on a few occasions with his band, they tend to give more structure to the performance. There are always improvising times but still a coherent flow to the gigs. Solo Ryan lacked a little focus and the ramblings of Adams were funny but not to the people at the back of the hall as they could not hear his little nuances.

This was an exhilarating performance that should never be missed. Any opportunity to see the talent of Adams should be embraced. Sometimes he misses with performances but to be in the presence of a truly great performer who can strike gold at anytime keeps you on the edge of your seat.

Don't Get Sentimental On Me
Two
Sweet Lil' Gal (23rd/1st)
Call Me On Your Way Back Home
Two Hearts
Elizabeth, You Were Born To Play That Part
Why Do They Leave?
Nightbirds
Drunk and Fucked Up Like The Twilight Tonight
Magnolia Mountain*

When The Stars Go Blue
La Cienega Just Smiled
Everything Dies
Thunderstorm Destroyed Your Trailer Park (improv)
Fool For You
Games (aborted)
The End
A Kiss Before I Go
Silver Bullets
Wonderwall
To Be Young (Is To Be Sad, Is To Be High) > Wharf Rat