Rustie wants to do a lot of things at once. He wants to make you dance, but he also wants to make you stroke your chin. Sometimes he wants to make you do both at the same time, which is never a good look. He wants to reclaim tacky-sounding synths from puerile pop, but he also wants to make Serious Music. He wants to be as self-indulgent as he can get away with, but it also wants to create music which is, to some extent at least, concise and punchy. Those last two desires, in particular, are problematic: how on earth can a record embrace prog-dance excess while remaining reasonably accessible and direct? And yet (spoiler alert) it turns out that his new album can, just about, pull off this manoeuvre, which is a testament to Rustie's compositional skills. I imagine that most electronica boffins would have given up after a few frustrating hours of trying to navigate between the Scylla of unchecked progressive wankery and the Charybdis of hands-in-the-air naffness, but Glass Swords, the producer's first full-length record on Warp, avoids both hazards dexterously. 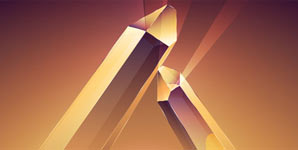