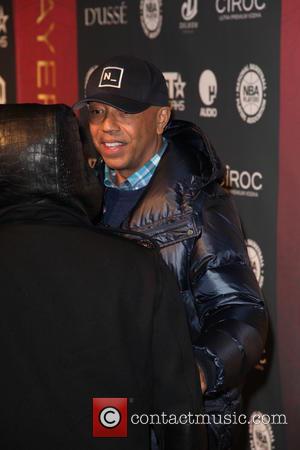 Russell Simmons has come to the defence of his friend Kanye West after the rapper's latest clothing collection was mauled by fashion critics.

The hip-hop star launched his new designs for sports brand Adidas at a New York Fashion Week show on Thursday night (12Feb15), and the event was attended by friends including Rihanna, Beyonce, Jay Z and Sean 'Diddy' Combs.

The collection was met with scathing reviews from fashion critics, with one writer from Bloomberg describing the range as "Flashdance meets American Horror Story" while a blogger for Epidemiclive.com called it "clothing a homeless person would wear after the apocalypse".

Simmons was also in the audience for the show, and he is adamant the critics just don't understand West's talent.

He tells the New York Post's gossip column Page Six, "His style and influence is so obvious... There is no reason why his collection, which really is meticulously designed and overseen by him, should not be a big hit... (I wonder if those) who are supposed to be judging understand how much detail, how thoughtful that show was."

Simmons also reveals West worked extremely hard on the collection to make sure his designs were right, adding, "I was there the night before. Kanye had been locked in that studio for 72 hours... I left, went to Chris Rock's birthday, came back, he's still there at 2am... He had like 30 French and Italian guys running around, and everything that they did was inspired only by his direction."