Russell Crowe Wants To Screen Noah For The Pope 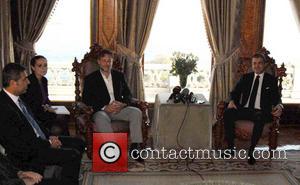 Hollywood actor Russell Crowe has launched a campaign to have his new biblical epic Noah screened for Pope Francis.

The Gladiator star plays the title role in Darren Aronofsky's new film, which is based on the Bible story of Noah and his ark, and Crowe wants to make sure the leader of the Catholic Church sees the movie.

He has launched a campaign on Twitter.com in a bid to arrange a screening for the pontiff, tweeting his official account and urging fans to re-post his messages.