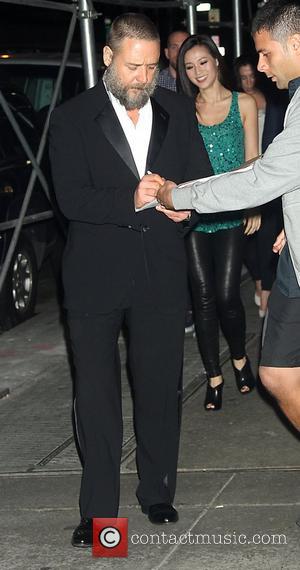 Picture: Russell Crowe 'The Man With The Iron Fists' screening at the Lighthouse Theater - Outside Arrivals New York City, USA - 27.10.12

Russell Crowe's Noah; a film depicting the tragic story of a colossal storm sent by God, is facing a huge delay in production due to a huge storm, although we can't confirm if it was sent by any kind of deity.

Hurricane Sandy, or Frankenstorm as it's colloquially been dubbed, has sent many aspects of New York life into standstill, including myriad TV and film productions, but perhaps one of the more ironic stoppage sees Noah forced into a lengthy pit stop, The Los Angeles Times reports. Emma Watson, who co-stars in the film opposite Crowe, sent out a Twitter message Sunday night saying, "I take it that the irony of a massive storm holding up the production" of the film was not lost on her director or Crowe. Now a delay in production due to one of the biggest storms in history is manageable; it has to be as it's unavoidable anyway, but perhaps a more pressing concern for the team behind the film is the ship floating in Oyster Bay, N.Y.: a certain point of contact for the storm. Seeing a huge wooden ship floating around in the aftermath of colossal rain is just ridiculous, isn't it?

Elsewhere, Jimmy Fallon and David Letterman went on to tape their talk shows without a studio audience, in perhaps one of the most foolhardy interpretations of the Hollywood slogan: 'the show must go on'.