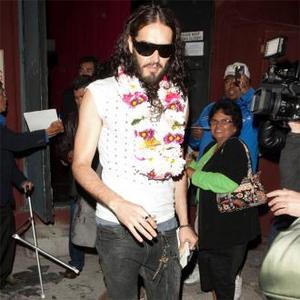 The 36-year-old comedian and actor announced his divorced from Katy Perry last December and has dated a string of women since.

Now he is said to be seeing Anouska de Georgiou who was romanced by the 'Baywatch' legend in 2010.

According to The Sun, she has been linked with Jared Leto, Lee Ryan from boy band Blue and Simply Red's Mick Hucknall.

Russell was introduced to the budding actress at a charity fundraiser in Los Angeles on Sunday.

A source said: ''Anouska is determined to be a success in Hollywood. She's a fiercely ambitious girl.''

She had a small part in the 2004 film remake of Alfie, the British socialite signed up to a Channel 4 reality show called 'California Dreaming'.

An insider shared: ''Anouska is a good match for Russell as she's got a fiery personality. It won't be too difficult for her dealing with the limelight. She had a pretty serious relationship with The Hoff a couple of years ago.

''They were together for almost a year, which in LA is a big deal.''