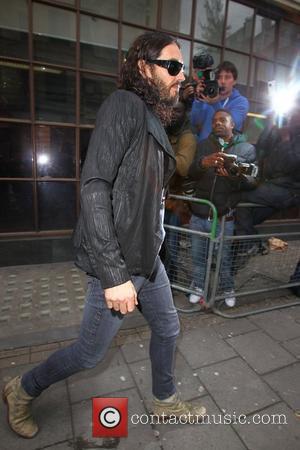 Russell Brand has given a rare interview about his divorce from Katy Perry, to UK television presenter Lorraine Kelly. Appearing on the Itv star's show on Wednesday (June 13, 2012), the comedian explained that he is still fond of the superstar singer, though appeared relieved he had gotten the "admin" out of the way.
Brand joked that the most difficult thing about having a divorce is the paperwork, saying, "[The marriage] did work out in a way, you're married and it's good, then you're not married and it's good.You just have to have acceptance of things. She's a person I love but this is a new time", joking, "Divorce is difficult because of the admin. A lot of admin!". During an interview with Ellen Degeneres in May, the host of the 2012 Mtv Movie Awards said he had no regrets about his relationship to Perry, telling the host, "I was very happy to be married with her. She's such a beautiful human being and I just have only love and positivity for her".
Brand and his 'Rock of Ages' co-star Tom Cruise could find themselves at the top of the box-office come this weekend, should the comedy musical topple animated flick 'Madagascar 3', which opened to $60 million last week. The movie - directed by Adam Shankman - follows a small town girl who meets a city boy on the Sunset Strip while pursuing her Hollywood dreams.