Jemima Khan having best sex ever with Russell Brand

Russell Brand and his girlfriend Jemima Khan are enjoying a passionate romance and have been engaging in embarrassing public displays of affection. 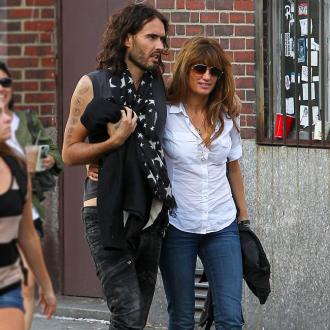 Russell Brand is having the ''best sex ever'' with Jemima Khan.

The comedian and his socialite girlfriend - who got together in June - reportedly have amazing chemistry between the sheets and Jemima is hooked on the former sex addict's adventurous spirit in the bedroom - much to the dismay of her family.

A source told The Sun newspaper: ''She's never met anyone remotely like him and he makes her feel incredible. She's also never met anyone who is so adventurous in bed. She can't get enough of him. She just says he ticks every box.

''Her mother is trying not to let her panic show because she doesn't want to push her further into his arms. She's being as pleasant as possible, but any mum would be terrified at the thought of Russell Brand squiring their precious daughter.

''Her friends are worried, it's to do with what he says about people he knows and that he's slept with so many people.''

This kinky revelation comes after the pair were reportedly given a stern telling off at PR boss Matthew Freud's posh London pad earlier this month when they embarrassed fellow party-goers by kissing on the sofa.

The lovebirds couldn't keep their hands off each other, according to The Daily Mirror newspaper, much to the shock of everyone in attendance.

An insider said: ''Russ and Jemima were curled up together, and what started out as flirting quickly got embarrassingly passionate.

''Pretty soon, they were wrapped up in each other and wriggling around like teenagers. Some people thought they needed to get a room. In the end, Matthew went over and had a quiet word.''

Russell has a reputation as a womaniser and was previously married to Katy Perry, Jemima's ex-husband is Pakistani cricketer-turned-politician Imran Khan and she also had a long-term relationship with actor Hugh Grant.