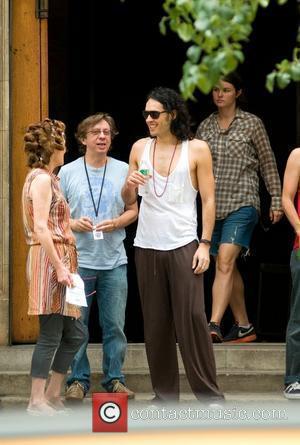 British funnyman Russell Brand was left battered and bruised after a truck ploughed into his luxury car in New York last week (ends01Aug10), according to U.K. reports.
The Get Him To The Greek star was leaving the set of his new movie Arthur with a pal when a truck shunted the rear of his $233,000 (£150,000) Lamborghini Superleggera.
Brand, who was a passenger in the vehicle, suffered cuts and bruising on his arm, according to Britain's Daily Mirror.
A source tells the publication, "The whole incident was pretty terrifying. Russell was very shaken. He refused to go to A&E (accident and emergency department at hospital) despite severe bruising on his arm and cuts.
"He's gutted as he's only just taken loan of the car."