Canadian Rock Trio Rush May Quit Touring After Their U.s. Dates Come To An End, According To Guitarist Alex Lifeson. 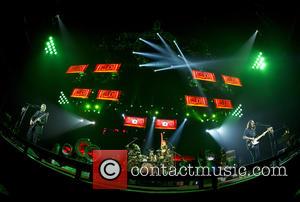 The band embarked on a tour of the U.S. last month (May 14) to mark their 40th anniversary, and guitarist Lifeson has now told the Niagara Falls Review that they may soon quit the road in favour of playing multiple-night residencies.

Lifeson says, "We've always talked about doing say five days at Radio City (in New York), five days at Massey Hall (in Toronto), those sorts of runs instead of five, six, seven months (on the road).

"It's a lot tougher at 61 than it was at 21. And we're all feeling the aches and pains of our advancing years. I have had arthritis for a long time and it's just a little more in the forefront, in terms of my hands... We all go to the gym, four or five times a week. It's not just sitting around and eating chips and smoking pot. I mean that's fine but to prep for a tour, it's a really serious endeavour."