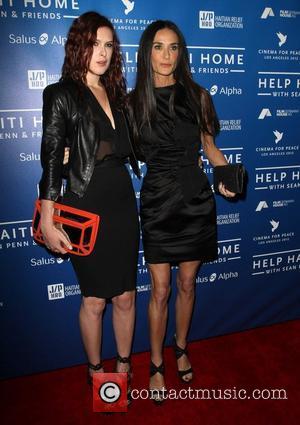 Rumer Willis has been spotted hanging out with Glee's Mark Salling at a party in the West Hollywood Hills. The party was at a private residence and was sponsored by T Mobile and Google Music. A source told People magazine that the couple arrived separately but left together, though added that they seemed to be friends and there did not look to be any romantic involvement between the pair.
Since her mother. Demi Moore was taken to hospital several weeks ago, Rumer Willis has been seen seeking comfort from a number of her celebrity friends. Notably, she was seen dining out in Los Angeles with Glenn Close, Glenn's husband David Shaw and their daughter Annie Stark, on the eve of the Screen Actors' Guild Awards. Rumer and Annie also attended the awards ceremony and after-party together. Prior to her hospitalization, Demi Moore was spotted out partying with Rumer at a birthday party thrown for Miley Cyrus' boyfriend Liam Hemsworth.
Demi Moore was hospitalized after suffering seizures at her home. It was during a party that she was hosting for a friend. Rumer and Annie were also present at that party and can be heard on the 911 call that was released to the media. It is thought that she had been inhaling nitrous oxide, which led to the seizures.