Rosie Huntington-Whiteley has admitted she loves it when her boyfriend Jason Statham sleeps without any clothes on. 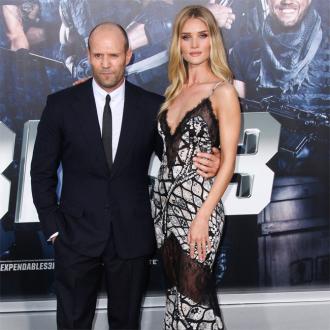 The 27-year-old model has admitted she much prefers to sleep alongside the Hollywood hunk - who she has been dating for nearly five years - when he doesn't wear any clothes in bed so the blonde stunner wouldn't consider designing a male range of pyjamas for him to wear.

When asked during a fan Q&A if she would ever get her creative juices flowing on some men's nightwear because Jason ''needs something to sleep in'', Rosie - who has a lingerie and nightwear line - replied: ''does he...? I was quite happy with him sleeping in nothing ;-) (sic)''

But it's not just Jason who gets plenty of attention from Rosie in bed as the former Victoria's Secret Angel admitted she cannot get enough of embracing her two pet pooches Peggy and Dolly when she is relaxing.

When asked what her favourite thing to do with her pair of Daschunds is, she replied: ''snuggle in bed for as long as possible! X (sic)''

Rosie also admitted spending time at home with her four-legged friends and Jason is her favourite place to be in the world.

She wrote: ''because i travel all the time I like to spend time at home with friends, my family & my dogs. Where's your fave place to be? X (sic)''