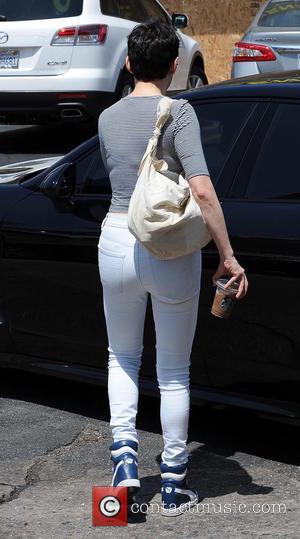 The former Charmed star sat in the audience at the No Labels event in Washington, D.C., which aimed to bridge the gap between the Democrat and Republican parties, and live-tweeted her intention to halt proceedings, writing on Twitter.com, "I'm going to annihilate in 3-2-1..."

The celebrity guests were asked to stand up, and the actress then took over the event to embark on a rant, which she recorded on her cell phone.

"May I speak for one minutes (sic) gentleman and ladies? I'm just going to be very, very quick, I want to thank you for your interest in bipartisanship," she can be heard saying in the video footage. "I'm completely hijacking this. I've lived in 27 different states, I've (had) a life filled with struggle, I'm a small business owner, I'm an investor, in short, I am an American. I do see bipartisanship but I've heard this stuff for years."

She then called the crowd "rich white male republicans" and lectured them about a lack of diversity and knowledge of real American issues, before walking out the room.

Following the event, she wrote on Twitter, "I just fully hijacked a gala dinner & f**king gave it to them. I represent America. I am an American and I have a right to speak... I said my piece as a citizen as is my right. Maybe politicians should tell the truth sometime.

"I will not sit idly by as absolute bs (bulls**t) pandering is going o (sic). What's wrong with being real?... I do not have to be a good little girl. I am a free person, pity if you're not. I love all of the pearl clenching. That's rich... Artists are supposed to challenge the power structure. Is this new? Uh... no. Nothing wrong with setting fire to the lies."