Rosario Dawson and James McAvoy became obsessed with Scrabble on the set of their new movie 'Trance', and would play the game in between takes. 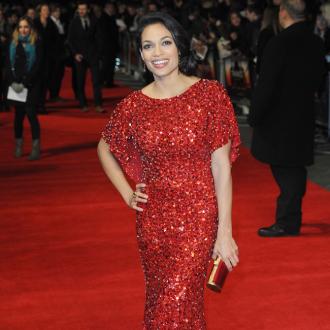 Rosario Dawson and James McAvoy played Scrabble on the set of 'Trance'.

The actors - who star alongside in Vincent Cassel in the art heist thriller directed by Danny Boyle - would unwind on set after filming some of the movie's graphic, violent scenes by whipping out their phones to battle each other in a mobile version of the popular word game.

Rosario told the Daily Mirror newspaper: ''It's a trippy film. We were playing Words With Friends, which is like an online Scrabble game, in between shots.

The 33-year-old beauty - who split from the film's director earlier this month - isn't the only Hollywood star to indulge in a new hobby between takes.

'Jack the Giant Slayer' star Nicholas Hoult, 23, admitted he became ''obsessed'' with knitting while filming the upcoming reboot of 'Mad Max' in Africa.

He said: ''A make-up artist taught me. I've stopped. Although I did become obsessed with it. I made two scarves, a snood and five hats. It was such a masculine set.''

Meanwhile, generous Hugh Jackman, 44, is famously known for buying scratch cards for the cast and crew of his movies every Friday.

He previously explained: ''It's my way of paying taxes. The very first film I did in America, I was embarrassed to say two months in that I didn't know half of the crew's names. So I thought that on a Friday afternoon I'll whip by and buy lottery tickets for everyone and hand them out. I say it's an Australian tradition, but it's not.''