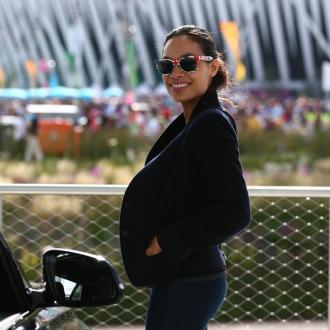 Rosario Dawson found it difficult walking around completely naked for her new movie.

The 33-year-old 'Trance' star - who recently split from the movie's director Danny Boyle - has admitted she felt ''insecure'' walking around with nothing on and her co-stars including James McAvoy made the experience ''more awkward'' by refusing to look at her.

Speaking at the world premiere of the movie at the Odeon West End in London's Leicester Square on Tuesday night (19.03.13), she exclusively told BANG Showbiz: ''The hardest and scariest part about it was walking. I was trying to figure out, like, how do you walk in front of everyone when you're naked? I don't think you really plan to do that really well.

''It's actually interesting because everyone's trying to be really respectful and polite and not look at you, but that almost makes it a little bit more awkward because you know you're performing to a certain extent. Like, I'm standing there and I'm walking across the room and I'm like, 'Am I walking too slow? Should I move my hip a little bit more?' You really get self conscious about the stupidest things.

''It was really funny because I'm looking over at James and James is not looking at me at all. He's looking at my shoulder; he's looking at some spot on the wall. It's sort of just like, OK, just be in the moment, be in the character.''

Rosario said she prepared for the nudity as best as she could before even auditioning for the role.

She said: ''I was long since prepared to do it because, even when I read the script, I knew, 'Don't even bother auditioning if you aren't willing to do this.' That wasn't the part that was weird. It was just more my walk. It was just really strange suddenly realising on the day, like, that's a really weird thing to be insecure about all of a sudden!''

Rosario was joined by Danny, James, Vincent Cassel, and Tuppence Middleton at the red carpet event.