The British actress' most memorable scene in the thriller involved her slitting a man's throat while having sex with him.

British actress Rosamund Pike, a former 'Bond' girl, starred alongside Ben Affleck and Neil Patrick Harris in one of 2014's most thrilling films 'Gone Girl,' but shooting the infamous violent sex wasn't a thrill in the slightest. 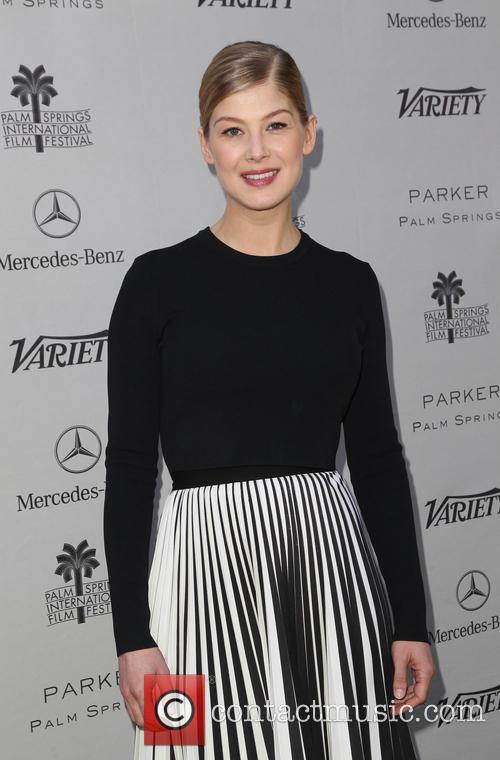 While the British actress covers the February issue of Vanity Fair, details are released about a memorable chilling scene in the film adaptation of Gillian Flynn's best-selling novel, in which she was tasked with slitting a Harris' throat, who played Desi Collings, while having sex with him.

"I told them to rehearse it for three days," 'Gone Girl' director David Fincher revealed to the magazine, "as we're pumping five gallons of blood out of Desi's throat."

Pike portrays the female lead, Amy Dunne, a troubled woman who fakes her own murder and decides to seek refuge in her obsessive ex-boyfriend Desi's home. However, when he becomes too controlling, Dunne plans to kill him and make it look like she was defending herself against rape.

The harrowing sex-murder scene was choreographed for one full week, took 36 takes to perfect and required 450 gallons of fake blood.

Pike has previously spoke candidly about playing such a suspenseful female role, and the emotions she felt when acting in such an intense storyline.

"There were definitely moments when I felt very uneasy with how much power Amy had," she told the October issue of Glamour magazine. "And the interesting thing is, my reaction was to laugh, to get sort of uncontrollable giggles. That was the most curious part of playing her: At the point where she's at her most powerful, it unnerved something in me."

Gone Girl's Rosamund Pike, "Separation Is Key To a Relationship"

Is Rosamund Pike In Line For An Oscar Thanks To ‘Gone Girl’?