The British actress recently discussed how she is balancing Hollywood life with raising a newborn son.

As well as being an Oscar nominated actress, Rosamund Pike is also the mother to a two-month old son, so balancing life in Hollywood with motherhood will undoubtedly be difficult. But the British star seems to have found a way! 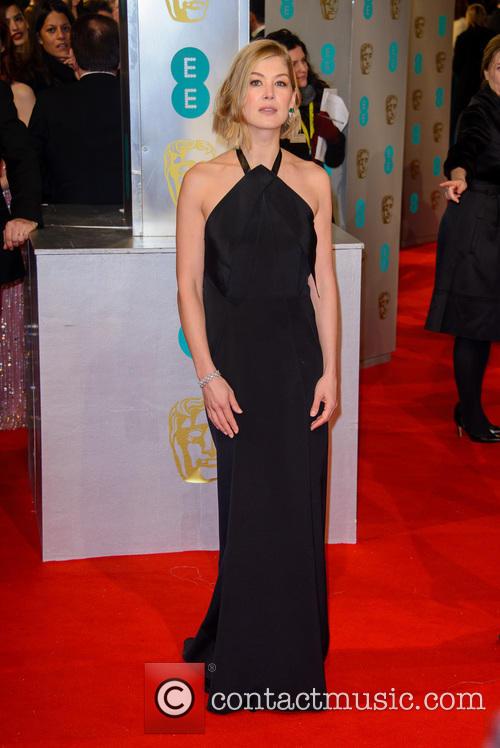 Pike brestfed backstage at the BAFTAs

In an appearance on The Ellen DeGeneres Show on Thursday (Feb 12th), The 'Gone Girl' actress spoke about raising her newborn baby and revealed that she stripped down backstage at the BAFTAs in London this past Sunday (Feb 8th) to breastfeed her child.

"He's nine weeks old, but I am just taking him around with me," Pike told Ellen of her baby boy. "It has a very interesting effect on people because they don't expect it. I'm turning up to meetings, cause what do you do? You're a mom and you got a baby who needs to eat. So I turn up and they're like, 'Oh, your baby's here,' and I'm like, 'Yeah, yeah he is.'"

Pike, who welcomed her second son, Atom, with her longtime partner Robbie Uniacke in December 2014, admitted that her children don't come everywhere with her, but in recent weeks they have attended some of Hollywood's biggest award show.

"I do have help on the night of the award shows," she explained. "It's a whole operation. It's a funny kind of rock and roll. I do the red carpet - I get there really early. I'm the sort of really uncool one who turns up very early for carpet - first time I've never been early for anything in my life, right? And then I disappear off and I set up a sort of station backstage somewhere."

"It started off very organized... I'd bring a robe and I'd bring all the kind of gear and I'd change into slippers," she continued. "At the BAFTAS on Sunday night, I was like 'Oh, sod it,' and I just [went] up into the chairman of the Royal Opera House's office and just tried to put on the robe and it just wasn't... I couldn't do the buttons, and whipped it off."

"I was just sitting there butt-naked with the double breast pump," she added while laughing. "If this guy had seen the kind of scene it was as underhand as if we'd been taking drugs or something. But it was the most innocent, pure kind of [thing]."

Pike has been nominated for an Academy Award for her portrayal of Amy Dunne opposite Ben Affleck in 'Gone Girl.'