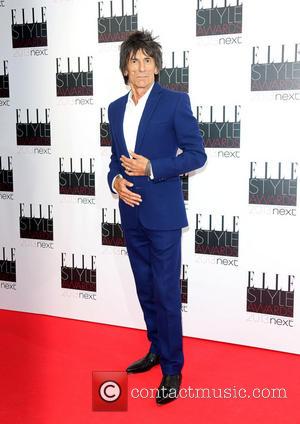 Ronnie Wood's ex-wife Jo Wood has told how she quit drugs after suffering a seizure while getting high with the Rolling Stones rocker.

Jo, who split from the guitarist in 2008 following his affair with waitress Ekaterina Ivanova, opens up about her turbulent marriage to Ronnie in her new book Hey Jo, which is being serialised in Britain's Daily Mail newspaper.

Recalling her wild past, Jo reveals she spent a "crazy" 18 months "freebasing" cocaine with Wood and his celebrity pals in their Los Angeles home in the 1980s, but she finally cleaned up her act after a medical scare.

She writes, "I'd had a seizure while freebasing. To my horror, I realised I hadn't done anything apart from that stupid drug. So I stopped."

Jo continued to put up with Ronnie's wild ways for years, but she admits alcohol eventually destroyed their relationship.

She adds, "The last years of our relationship were ruled by Ronnie's alcoholism. One night I was asleep when Ronnie burst into our bedroom, drunk as a skunk. 'There's no f**king vodka in the house!' he yelled. On that occasion he really lost it. The poison started pouring out of his mouth.

"(He said,) 'I'll throw acid in your face... You'd better watch out because I know people...' It was as if he was possessed (which, in a way, he was). When he woke up the next day I asked him if he remembered the night before. 'No,' he said, sleepily. 'Was it a good night? Coffee would be lovely.'"