Rousey is undertaking hosting duties on 'Saturday Night Live' for the first time on January 23rd.

Ronda Rousey has been showing off her newly found comedy skills in a new promotional video ahead of her ‘Saturday Night Live’ hosting debut this weekend, in which she fends off cast regular Beck Bennett’s romantic moves and throws him to the ground, for good measure.

The 28 year old former UFC bantamweight champion, who was reportedly the third most-searched name on Google in 2015, will be making her first hosting appearance on the weekly NBC show this weekend (January 23rd). 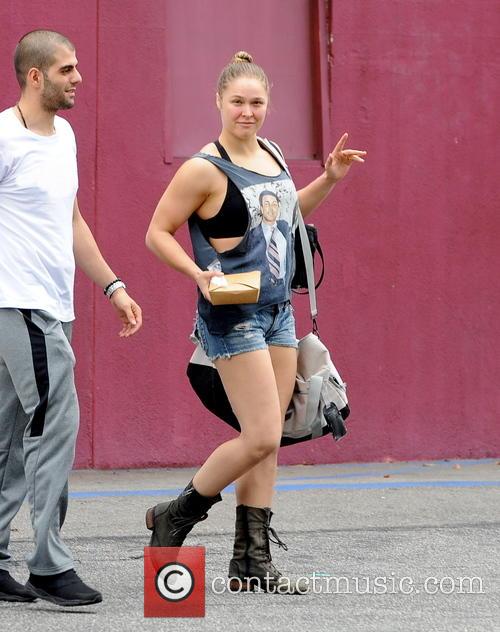 She amusingly made a couple of cracks about Bennett’s manhood, as she played along with his sketch in the promo released on Wednesday. “Ronda, I can tell you're scared,” Bennett jokes as he sneaks his arm around her shoulder. “Take your arm off me or I'll rip it off,” Ronda responds bluntly as he backs down.

More: Tina Fey and Ronda Rousey teaming up for comedy ‘Do Nothing Bitches’

Inevitably, Bennett didn’t stand a chance when he challenged her to a showdown. He was dressed in a rather ridiculous leotard replete with a cape, and she in a formal dress, but she responded to his headlock by easily flipping him down to the ground, finishing off by flicking her hair back.

The athlete-turned-actress is looking to expand her portfolio in the coming year or so, having signed up to star in a re-make of the Patrick Swayze cult classic Road House, and alongside Tina Fey in a forthcoming comedy Do Nothing Bitches. She’s already made a handful of cameo appearances in movies such as Furious 7, Entourage and The Expendables 3.

Meanwhile, back in the ring, Rousey has her sights set on her next fight with Miesha Tate. Back in November, she was toppled from her three-year reign as UFC champion by Holly Holm, who said yesterday: “For me I want to keep fighting and if Ronda wants to come back and that’s her passion — great. If she wants to stay in movies — great.”

More: ‘I’ll be back’ – ‘Rowdy’ Ronda Rousey isn’t going down that easily