Former Boyzone Star Ronan Keating Is Planning To Wed Again After Proposing To His Girlfriend Just A Month After Finalising His Divorce From First Wife Yvonne. 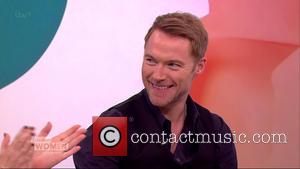 Picture: Ronan Keating - Ronan Keating appears on 'Loose Women', to talk about playing the leading role of Guy in musical 'Once'. Shown on ITV1 HD...

The Irish pop star, 38, and Storm Uechtritz have been dating since 2012 - the year after he separated from his wife, the mother of his three kids.

Confirming the engagement news to Hello! magazine, Keating says, "I proposed twice and she said yes both times, thank God."

He got down on one knee the first time during a recent trip to Thailand and the couple waited until it was back in Ireland, surrounded by his kids, when he asked again.

He adds, "We've been together a few years now and knew we wanted to spend the rest of our lives together. I felt it was the right time."

Keating wed model Yvonne Connolly in 1998 after a whirlwind romance. They were married for 17 years. Their marriage ended shortly after he embarked on an affair with dancer Francine Cornell. Yvonne initially gave her cheating husband a second chance but the couple split for good in 2011.