The director opens up about his third Dan Brown film.

Ron Howard returns with more theology based mystery with 'Inferno'; the film adaptation from Dan Brown's series of Robert Langdon novels which will once again star Tom Hanks in the lead role. While you might guess there'll be more puzzles, narrow escapes from death and questions of faith, the director insists there's something a little bit different about this one. 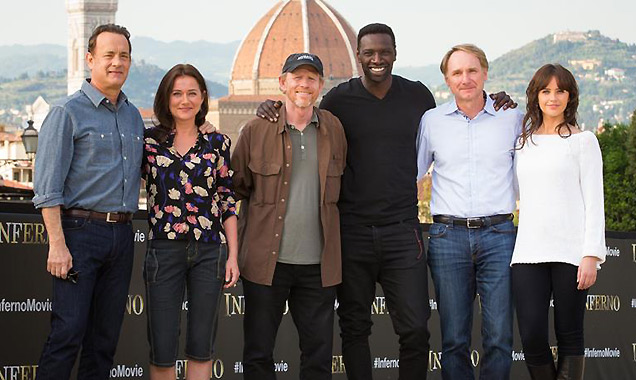 Probably best known for the second of his novel series, 2003's 'The Da Vinci Code', Dan Brown returned with 'Inferno' in 2013 - and there's little surprise that this is another to hit cinema screens. The Golden Globe nominated 'Da Vinci Code' adaptation was followed by a prequel - 'Angels & Demons' - which included themes of science, revenge and global conspiracy, much apart from the Holy Grail quest of the former. But now, with 'Inferno', the depths of the universe are even more closely explored.

More: Watch the trailer for 'The Da Vinci Code'

'Each one of these films has offered a different directorial challenge because the tones have been a little bit different', says director Ron Howard. 'The first one was more classic, the second one more of an action movie, this is very much a character-driven psychological thriller. It feels more modern. The issues at stake are very relatable and so it demands different ideas from its director.'

'Inferno' is in fact so character-driven, that even the stunning set of Florence becomes a character in itself. 'Florence is spectacular, I've been here many times as a tourist but nothing compares to living here long enough to begin to feel that you understand the heartbeat of the place', Howard explains.

Without wanting to reveal too much about the plot, 'Inferno' sees Tom Hanks' character Robert Langdon awaken in a hospital room in Italy with little knowledge of how he got there; the last thing he remembers is setting off to a lecture at Harvard nearly 4,000 miles away. It soon becomes clear that something terrifying is happening and Langdon must unite with his doctor Sienna Brooks to work out what's going on in the breath-taking city of Florence.

This will be Howard's third venture as a director for a Dan Brown story. 'The Lost Symbol' actually marks Brown's third novel (released in 2009), but this has not yet begun filming. Mark Romanek is rumoured to be in talks for directing this feature.