Activists from the anti-domestic violence group Sisters Uncut climbed over the barriers and laid down on the red carpet.

Dozens of feminist protestors have staged a demonstration at the red carpet reception for the movie Suffragette, which held its premiere at Leicester Square in London on Wednesday afternoon.

Activists from the feminist group Sisters Uncut, who campaign against domestic violence, used the glitzy red carpet event to stage a vocal protest against funding cuts to domestic violence services, with nearly 100 demonstrators clambering over the barriers and lying down on the walkway, while their comrades shouted slogans such as “cuts kill” and “dead women don’t vote”. 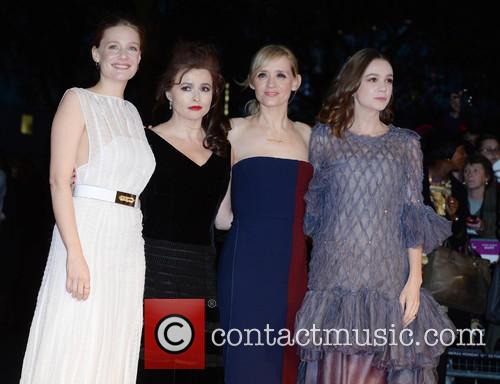 The four 'Suffragette' stars posed in T-shirts with the phrase 'I'd Rather Be A Rebel Than A Slave' for Time Out London last week.

A publicity photo featuring Meryl Streep and her Suffragette co-stars in T-shirts bearing a feminist slogan has sparked a social media backlash.

Streep, Anne-Marie Duff, Romola Garai and Carey Mulligan were photographed for the front cover of Time Out London last week, with all four of them wearing white T-shirts featuring the phrase ‘I’d rather be a rebel than a slave’, which is an excerpt from an Emmeline Pankhurt speech urging reform of the law to allow women the right to vote.

While many have praised the feminist sentiments, a large number of critics have claimed that the use of the slogan on the T-shirts was insensitive of the historical context of the word ‘slave’. The photoshoot was also accused of inappropriately using four white, privileged women to invoke the struggles of slaves in the Confederate south.

By Rich Cline
OK
Following a relationship on one day a year over more than 20 years is an interesting idea, and this film features a solid cast and some genuinely moving situations. But it's ultimately too slushy and dreamy to really resonate.

On St Swithin's Day, 15th July, in 1988, Emma (Hathaway) meets Dexter (Sturgess). Both are university students in Edinburgh, and there's a clear spark between them, but circumstances prevent them from becoming a couple. The years pass. Dexter moves from being an annoying TV host to a chef and has a daughter with Sylvie (Garai). Meanwhile, Emma has a career as a teacher and maintains an unsatisfying relationship with Ian (Spall). And they keep running into each other along the way, wondering what might have happened - and may yet happen - if they got together.

Emma Morley and Dexter Mayhew meet at Edinburgh University and graduate on July 15th, 1988. On the same day, they spend a chaste night together and begin a friendship that will last for the rest of their lives.